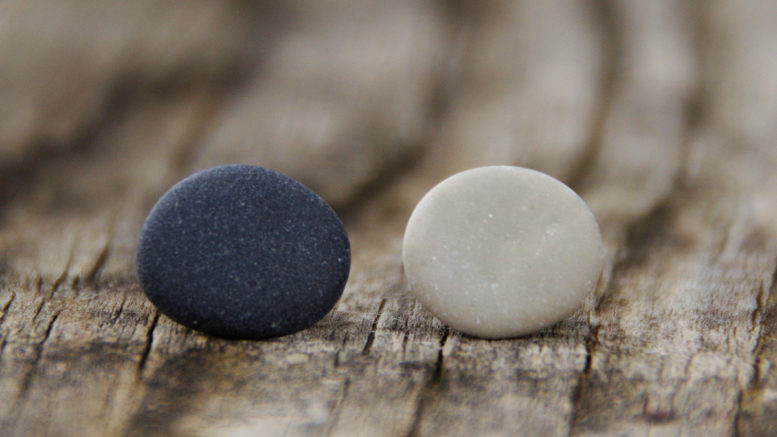 What would you do in this situation?

A businessman owed a large sum of money to a loan-shark who's very old, unattractive and happened to fancy the man's daughter.

So he told the businessman he would wipe out the debt if he allows his daughter to marry him.

The loan-shark said that he would place two pebbles into a bag, one white and one black. The daughter would then have to reach into the bag and pick out a pebble.

If it were black, she would marry him. But if it were white, the daughter didn't have to marry him. In either case, he would wipe out the businessman's debt.

The loan-shark bent over and picked up two pebbles from the pebble-strewn path in the businessman's garden.

While he was picking them up, the daughter noticed that he'd picked up two black pebbles and placed them both into the bag.

He then asked the daughter to reach into the bag and pick one.
‍

Now, she had three choices as to what she could have done:
‍

1. Refuse to pick a pebble from the bag;

2. Take both pebbles out of the bag and expose the loan-shark for cheating; or

3. Pick a pebble from the bag knowing full well it would be black and sacrifice herself for her father's freedom.
‍

She drew out a pebble from the bag, and before looking at it 'accidentally' dropped it into the midst of the other pebbles.

She said to the loan-shark;

"Oh, how clumsy of me. Never mind, if you look into the bag for the one that is left, you will be able to tell which pebble I picked."

The pebble left in the bag was, of course, another black one. Not wanting to be exposed, the loan-shark had no choice but to play along as if the pebble the daughter dropped was white, and cleared her father's debt while not being able to marry her.

And the moral of the story is?

It's always possible to overcome a tough situation through creative, out-of-the-box thinking, and not give in easily to the only options you think you have.
‍

Attnd one of our creative thinking courses on Rema Synergy Academy.